We returned to Europe via a ferry from (Spanish enclave in Africa) to (). We drove to the city of . It is thought to be the oldest city in . People have lived here for 3000+ years. And persistent rumours say that the lost city of was in the area.

Sevilla was next. Once a Roman port, it became the capital of the Muslim invaders in the 12th century. It then returned to Spanish rule and had a monopoly on trade with the colonies in from 1503.

In Mérida we gaped at Roman ruins en masse. Then we wild-camped on a hill among beautiful olive trees. 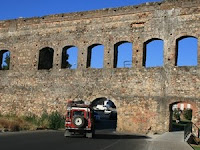 We drove into and relaxed a couple of days in Les Landes.

In Arcachon we found a lovely shack on the beach where they served fresh oysters.

In St Emilion we wild-camped in a vineyard and tasted the sour grapes (and the lovely wine).

We returned to via Lyon (wedding), and Legoland ().

Posted by Ringdahl family at 11:48 PM No comments:

A two-hour ferry ride took us from Tarifa to Tangier. We continued south along the coast, direction .

The town of was a favourite. We got lost in the medina.

is probably the most well-known city in . We enjoyed the spectacles in the main square (look at Atlas with a snake around his neck), the market and the palaces.

We crossed the . Our son Atlas was very proud and possesive. He claimed that every mountain and every stone were his. We walked through the thousand-year-old mud-brick . It has featured as a backdrop in many films.

As we continued south, the road disappeared under the sand. We continued another 200 km into the desert, in search of an advenure! We found dead camels, a lot of sand, and bedouins who live in this world of immense heat.

At dusk, a sandstorm hit us. Our guide Omar helped us to find shelter in a bedouin camp. Lucky us! After a few hours, the storm abated and we could sleep in our tent. The temperature was 2 degrees cooler in the tent than outside thanks to the fact that our bodies cooled the air inside the tent, Bizarre!

In the morning it was only 37 degrees. We took the opportunity to explore the sand dunes and play in the sand.

Omar knew some bedouins who had camels which we could ride on.

We escaped the heat, crossed the Atlas mountains at an altitude of 3000 metres, and came via Azrou to the city of . Disa turned 8 years, and we celebrated her birthday in the medina.

In the city of we had a superb guide who helped us through the maze of narrow streets.

Volubilis was a Roman outpost 2000 years ago.

We visited the blue city of and the medina in Tetouan before we reached te Mediterranan coast.

We left via the Spanish enclave , and looked back at the African continent as our ferry crossed the .

The kids loved . It is a great travel destination!