We were welcomed by our relatives at the Copenhagen Airport and we were overwhelmed! It felt great to be back! The party continued in Malmö. 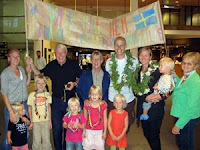 We will now spend the next few weeks settling in. We have traveled east by car for 16 months and the flight back to Sweden took 16 hours. It is quite an abrupt change of environment! But we are coming back to an environment we know very well, and in many ways we will adapt quickly of course. Nevertheless, it will take some time to ’land’ properly. We have so many memories to digest, and a lot to catch up on.

We managed to leave Cambodia without any hassle. The customs officers were sleeping, so they did not even bother to check our special car documents (which we had fought quite hard to get when entering Cambodia). However, to our surprise, the Thai Customs insisted on a special Car Import Fee because it was weekend. They really could not know that they were asking the wrong people. If we had traveled this far without paying any ’special fee’, we would not do it now.

We reached Mega-Bangkok through a maze of elevated highways and miraculously reached the tourist district around Khao San Road without too much trouble. We found a hotel and safe parking on Soi Rambuttri. Time to prepare for our return to Sweden.

We spent a lovely week in Bangkok. But true to our promise to our children, we did not visit even one temple... We arranged the car shipment through a very nice and professional agent – Transpeed. 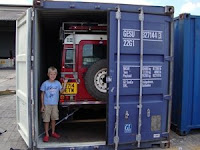 We went to the markets, indulged in excellent street food and relaxed in the hotel pool. 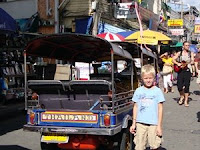 We squeezed the whole family into tuk-tuks, much to the surprise of the drivers. ’One, two, three, four children! Are they all yours?’ 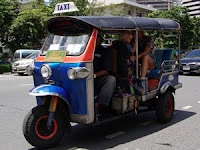 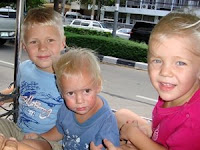 We experienced how brave our children were in a close encounter with a python! 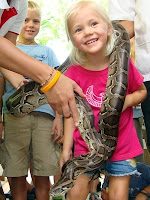 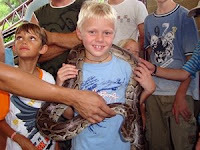 We tried to prepare mentally for the trip back to Sweden. It can be a challenge to return after a long journey. But once you know that you are going home, you also start looking forward to it. The difficult phase comes when you have settled in back home and you start to live a life full of everyday routines. This will be a challenge. 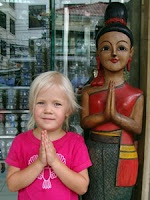 We have driven 60,000 km through 37 countries. We have had the pleasure of spending almost one and a half year together, 24 hours a day, in the most exciting and challenging environments. We have enjoyed the freedom and feel extremely privileged and happy. This has been the journey of a lifetime! And who knows, perhaps we get a chance in the future to do something similar again. Once a vagabond – always a vagabond!

Posted by Ringdahl family at 1:20 AM No comments:

Angkor Wat is the most well preserved temple complex of Angkor. It was probably never abandoned, so the jungle never got the upper hand. Angkor Wat is the flagship of Angkor, and the tour buses are many. The complex is beautiful, but the many tourists and all the restoration efforts have resulted in a lack of soul. At least in our opinion. We actually preferred the ’wilder’ and less polished temples of the Angkor region.

Nevertheless, Angkor Wat is spectacular. The moat is almost 200 meters wide and 6 km long. The buildings are enormous and perfectly symmetrical. The sculptures and bas-reliefs are very well kept.

Angkor Wat was the last temple we visited during our journey. It was quite a Grand Finale!

Posted by Ringdahl family at 1:15 AM No comments:

We eagerly continued our temple safari. Admittedly, there were times when the children stayed in the air-conditioned car while their parents chased through some less famous temples... 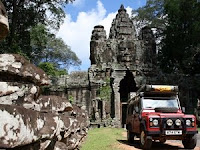 We stopped to admire some of the entrance gates to Angkor Thom. 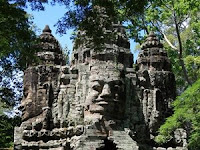 Ta Keo, a pyramid-like structure was impressive in its massive form. The steps were so steep that quite a few travelers must have ended their journeys here. 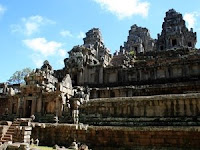 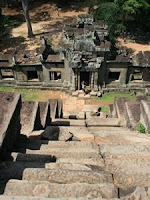 Preah Neak Pean was very serene and lovely with its five pools and a small temple structure in the center. 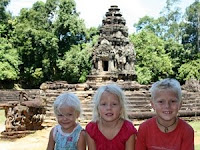 Ta Som is famous for the strangler fig tree which has all but swallowed one of the entrance towers.

Banteay Srei, from AD 967, is known for its pink sandstone and exquisite stone carvings.

The highlight was Ta Prohm, an enormous temple which has been invaded by equally enormous trees. Clearing the trees and vegetation would probably result in a collapse of the ruins, so the trees are allowed to continue their silent invasion. The result is spectacular for the visitors. 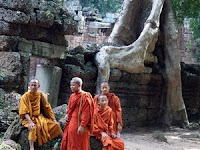 Posted by Ringdahl family at 1:09 AM No comments:

The Angkorian period spans from AD 802 to 1432. During this long period, a vast number of temples were built in the area around present-day Siem Reap. At its peak, the city of Angkor is believed to have had more than one million inhabitants. Today, only the sandstone temple ruins remain, since the normal houses were built of wood. The centrally located temples are spread over an area of more than 500 square kilometers, but there are many other Angkorian temples further away from Angkor (e.g. Beng Mealea). 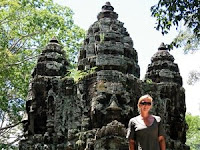 We bought a three-day entrance pass to the central temples of Angkor. We spent our first day exploring the enormous temple city of Angkor Thom (Great Angkor), constructed during the 12th and 13th centuries. The city is surrounded by an eight meter high wall, and a 100 meter wide moat, 12 km long. There are five impressive gates, guarded by gods and demons. We managed to pass through the narrow gate with our car. 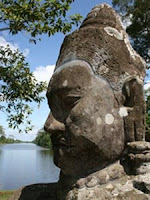 The highlight in Angkor Thom was the Bayon Temple. It is located in the very center, and it was built in a different style compared to the other temples in the area. The temple has three levels and is crowned by 54 towers, each with four enormous faces, carved from the stone blocks, glazing enigmatically into the distance.

Children and adults were equally thrilled with Bayon and we did not want to leave, despite the scorching sun.

On the outer wall of the lower level, there are fantastic bas-reliefs, 1.2 km long, depicting life in Angkor during the 12th century.

Other favorites in Angkor Thom included:
The 350m-long Terrace of Elephants.

The hundreds of apsara sculptures on the Terrace of the Leper King.

The elevated walkway to the Baphuon Temple.

The beautiful Kleang structures, between which line dancers once entertained the Angkor kings.

The Preah Khan Temple, with its narrow vaults, beautiful sculptures and Hindu symbols.

Posted by Ringdahl family at 12:59 AM No comments:

Our visit to the 12th century Angkor temple of Beng Mealea was a real highlight. It was abandoned centuries ago and the jungle has all but swallowed it. Even though many of the massive structures have collapsed, it is still a very impressive temple complex. Trees, bushes and vines grow everywhere and are completely intertwined with the stone structures. We had the place to ourselves and felt like real explorers!

Posted by Ringdahl family at 12:57 AM No comments:

Siem Reap is the base camp for exploring the many ruin complexes of the Angkor area. We found a lovely guest house, Earthwalker, where we could prepare for some serious temple sightseeing, and for the final leg of our journey.

We enjoyed the tasty Khmer food in the many good local restaurants around town. Banana blossom salad served on banana leaves, steamed fish served in coconut, lotus root salad, chicken in amok sauce with crispy vegetables, beef lok lak, and much more. And perhaps a dragon fruit for dessert? Yum!

Driving through the Cambodian countryside is very scenic. But we stay on the road. Land mines and off-roading are a bad combination.

The 200+ temples at Sambor Preikuk, halfway between Phnom Penh and Siem Reap, are lovely. Most of the brick structures are from the 7th century, hidden in dense jungle. They predate the great temples of Angkor by about 500 years!

Our self-taught guide, Bun Teng, made our hike among the temples a very memorable experience.

Posted by Ringdahl family at 5:19 PM No comments: